Woodblock printing is one of the earliest and simplest of the printmaking techniques. It is also one of the most enduring, having been in constant use for centuries. You draw the image for a woodblock print on the plank or long grained side of the board. The areas of the image that will not be printing are removed by cutting away the wood. Ink is applied to the raised areas and the image is printed in reverse on paper or cloth either by hand or with a press.

Wood is so familiar and it is easy for us to not give it much thought. Most of the woodblocks used today by printmakers are in laminate form – wood layers that have been glued together to produce a stable surface making it less prone to warping than a solid plank of wood.

Plywood is ubiquitous. Our homes are potentially full of it. What do you know about the use of plywood and fiberboard used in your kitchen cabinets, furniture and subflooring to name just a few domestic uses?

Types of wood used in printmaking:

Are all woods safe to use for woodblock printmaking? Some woods used for woodcuts can cause skin irritation and/or allergies. This is particularly true of tropical hardwoods. (www.uic.edu/sph/glakes/harts1/HARTS_library/printmak.txt)

Other woods (plywoods and Fiberboard) are made up of layers of wood or wood dust held together with adhesives. The adhesives may contain chemicals that are hazardous when inhaled or absorbed through the skin. 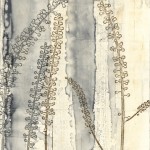 What makes one manufacturer’s plywood safer than another’s? The adhesives used in plywood have become a point of concern. Some manufacturers (Columbia Wood Products and McClain’s) have reduced or eliminated the use of formaldehyde in their adhesives.

What are the short-term health effects of formaldehyde exposure? When formaldehyde is present in the air at levels exceeding 0.1 ppm, some individuals may experience adverse effects such as watery eyes; burning sensations in the eyes, nose, and throat; coughing; wheezing; nausea; and skin irritation. Some people are very sensitive to formaldehyde, whereas others have no reaction to the same level of exposure.

Do I have to be concerned when I sand or create wood dust? Yes, the dust you inhale may be harmful. Use a well-fitted respirator when sanding. Report on Carcinogens – Background Document for Wood Dust: ntp.niehs.nih.gov/ntp/newhomeroc/roc10/WD.pdf

Artist Beware, by Michael McCann, Page 328: Relief printmaking: Woodcuts and Wood Engraving – … Hazards: some of the woods used – for example, boxwoods and some beeches – are moderately toxic skin irritants or can cause skin allergies. The dusts from many of these woods are moderately toxic if inhaled. See chapter seven, page 429, table 17-1, for full list of toxic woods. Birch: reaction – sensitizer, site: respiratory, potency – moderate probability, source – wood and dust, incidence – common.

How do I know that my plywood is safe to use? Not all plywood is created equal, know the manufacturer. Ask for MSDS sheets and look for products that use no urea formaldehyde such as:

How can I prevent exposure to this urea formaldehyde? www.niehs.nih.gov/health/materials/formaldehyde_508.pdf “Use lower-emitting pressed wood products, such as those that are labeled CARB (California Air Resources Board) Phase 1 or Phase 2 compliant, or made with ULEF (ultra-low-emitting formaldehyde) or NAF (no-added formaldehyde) resins. Ask manufacturers about products. Increase ventilation, particularly after bringing new sources of formaldehyde into the home. Open windows and use fans to bring in fresh air.” 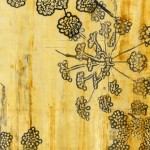 Low-Emission Interior Products: www.healthyhouseinstitute.com/hhip_782-Plywood “Realistically, the only way to obtain low-emission furniture-grade plywood product is to have it custom made. While feasible, this can add cost to a project—sometimes substantially.

Some manufacturers will custom make small quantities (even 1-2 sheets) of a veneered product to your specifications. The production process involves using a low-emission base material and laminating any number of different veneers (such as oak, cherry, hickory, or even exotic imported woods) to the front and back surfaces with a variety of different glues (such as a PF glue or a polyvinyl-acetate glue).

Hybrid plywood/fiberboard products are also available that have lower formaldehyde emissions than some other furniture-grade products.”

Plywood and its Uses Beyond the Studio:

Milestones in the History of Plywood: www.apawood.org/level_b.cfm?content=srv_med_new_bkgd_plycen