The photopolymer substrate includes the various light sensitive plates and films that printmakers use to create intaglio and relief prints. All of these products have several things in common: all have a light sensitive polymer surface that, when exposed to ultraviolet light, will harden; all require an ultraviolet light source to expose a film positive or negative; and most use water to develop the image on the plate surface (photopolymer films such as ImagOn, Z*Acryl and PurEtch use a solution of sodium carbonate and water to develop the plates). After exposure and developing, all of these photopolymer substrates require drying and must be hardened in light before printing.

The most popular and well-known of the photopolymer plates and films for artists are:

What is photopolymer? Photopolymer is a synthetic compound that is sensitive to light. Ultraviolet light will harden the polymer, and polymer that has not been exposed to light will remain soft and water-soluble. “The components of a typical photopolymer film include: binders (polymers that act as film formers, acrylate monomers (that polymerize during exposure), photoinitiators (react with ultraviolet light, causing the monomers to polymerize), plasticizers (impart softness and flexibility), colorants (for film identification), adhesion promoters (improve film-to-copper adhesion), and chemical agents (for printout image)* (from DuPont: www2.dupont.com/Imaging_Materials/en_US/assets/downloads/tech_bulletins/tb9944.pdf)

Are these plates and films safe for artists? This is not a simple question to answer. To begin addressing the safety of photopolymer substrate, we will focus our initial discussion on Toyobo Printight plates, which we directed most of our energies into researching, and will provide links to reliable Solarplate and ImaOn safety information on the web through links below.

You can find a range of information on the internet from claims that, at one extreme, photopolymer plates and films are non-toxic and completely safe for artists to use, to the other extreme, claims of skin irritations and respiratory problems after long-term and unprotected use of these plates.

To begin unraveling the facts, we need to distinguish between whether the plates are 1.) safe to print from in their completely hardened state, 2.) safe for artists to store, expose, develop, dry, and harden in a studio setup without the large, sealed commercial exposure/development units used with these plates in industry.

The second question is important and will be addressed in the questions that follow. Regarding the first question, we found no evidence to suggest that the plates themselves, once exposed, developed, and properly and completely hardened, posed any threat to artists’ health.

What do I need in my studio to process and print these plates as safely as possible? What kinds of precautions should I take when I work with these plates? Do I have to wear gloves when I touch or develop these plates? Respiratory irritation, skin irritation, and skin sensitization, are the health risks of processing photopolymer plates. There are precautions that can be taken that reduce your exposure to touching and breathing hazardous chemicals and that will make working with these plates much safer.

Adding ventilation to your workspace is key. Three steps in the platemaking process at least need adequate ventilation: the wash-out or developing step, the drying or heating step, and the hardening or curing step.

Nitrile or PVC gloves, rather than latex or vinyl gloves are the recommended gloves for working with photopolymer. The ketones in the photopolymer will melt both vinyl and latex gloves. See this chart for a comparison of gloves: blink.ucsd.edu/safety/occupational/PPE/gloves/chart.html 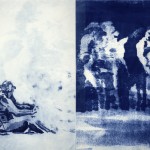 What is it that I smell when the plates are being developed in water and when I heat the plates to dry them? Toyobo Printight Photopolymer plates include the following chemicals: Caprolactam, Methanol, Methyl Acrylate (MA) and Methyl methacrylate (MMA).

We are unable to include the chemical composition of other photopolymer films and plates because they are not disclosed by their distributors.

Here is an analysis of the chemicals in the Toyobo Printight plates by Dr. Peltier.

The wash-out and drying/hardening steps produce a noticeable odor. This odor is released during the polymerization process as the individual monomers link to develop polymers. Until the polymerization process is complete, the monomers are released into the air and emit an odor. At this stage you would be breathing in the chemicals listed above if you do not have proper ventilation. Precautions: Ventilation and/or an organic vapor respirator. Respirator not necessary except for the most sensitive individuals or if ventilation is not adequate.

What information is there on the safety of Dan Weldon’s Solarplates?Weldon states on the Solar Plate website “Safety test results reveal that SOLARPLATE causes no harm to the human body when used under normal conditions, however, the user should work in a well ventilated area to reduce any odor concentration. People with hypersensitive skin are recommended to wear gloves.” He has also provided the original Solar Plate msds, an updated msds and a LHAMA.

How long does it take for the plates not to emit an odor during storage? Harden them as long as you can on a bright sunny day or in an exposure unit. When the monomers are completely polymerized they will not emit an odor.

How do I safely store these plates? Keep the plates stored in plastic bags Keep them away from humidity.

In letterpress printing, the face of image elements is in relief, i.e., it is raised above open areas. Historically, cast letters or types were set in a frame, inked and used in a hand-press for printing. Typesetting machines were introduced in the late 19th century. Photocomposition techniques arrived in the early 20th century. This led to the use of chemically etched metal plates for direct printing. However, for long runs or where multiple plates per page were required as in large newspapers, molds were made from the original plate (pattern plate) and then the actual printing plates were cast, most commonly from lead. These lead plates, called stereotypes, weighed about 45 pounds each for a newspaper-size page.

The introduction of personal computers in the sixties led many small printers to change to offset (lithographic) printing; but this was not economically feasible for publishers or medium- and large-size newspapers, who had a huge capital investment in letterpress equipment. Photopolymer plates made it possible for many newspapers to utilize modern photocomposition techniques using existing letterpress equipment. There was significant growth of photopolymer letterpress systems in the seventies. At the height of letterpress plates boom, over 40 million sq.ft. of photopolymer plates were used annually for newspaper printing in the US alone around the year 1980.

The first photopolymer-based letterpress plate is believed to be developed by Time Inc. and used by them in 1957 for magazine printing. This plate, called Tilon, was based on nylon chemistry. In 1960, DuPont came out with acrylic-based Dycril followed by Nyloprint by BASF in 1968. The last one is still in use for commercial printing including for dry offset which is also a letterpress printing except that an intermediate blanket cylinder transfers the image from a curved shallow-relief plate to the sub­strate. These plates were expensive for use in newspaper printing. In 1970, Asahi of Japan and W.R. Grace of U.S.A. introduced liquid photopolymers for newspapers. Nippon Paint of Japan developed a lower cost solid plate based on polyvinyl alcohol chemistry and was introduced in the US in 1973 as Napplate. The last one is still used by some newspapers today.

Currently, producers from Japan supply bulk of the letterpress photopolymer plates. For the names of suppliers see Printing Plates. They are used for printing of metal and plastic containers, narrow web printing and specialty/fine printing. Letterpress plates are also used as master plates or pattern plates, embossing plates and for making signs.

History: In 1890, the first such patented press was built in Liverpool, England by Bibby, Baron and Sons. The water-based ink smeared easily, leading the device to be known as “Bibby’s Folly”. In the early 1900s, other European presses using rubber printing plates and aniline oil-based ink were developed. This led to the process being called “aniline printing”. By the 1920s, most presses were made in Germany, where the process was called “gummidruck,” or rubber printing. In modern day Germany, they continue to call the process “gummidruck.”

During the early part of the 20th century, the technique was used extensively in food packaging in the United States. However, in the 1940s, the Food and Drug Administration classified aniline dyes as unsuitable for food packaging. Printing sales plummeted. Individual firms tried using new names for the process, such as “Lustro Printing” and “Transglo Printing,” but met with limited success. Even after the Food and Drug Administration approved the aniline process in 1949 using new, safe inks, sales continued to decline as some food manufacturers still refused to consider aniline printing. Worried about the image of the industry, packaging representatives decided the process needed to be renamed.

In 1951 Franklin Moss, then the president of the Mosstype Corporation, conducted a poll among the readers of his journal The Mosstyper to submit new names for the printing process. Over 200 names were submitted, and a subcommittee of the Packaging Institute’s Printed Packaging Committee narrowed the selection to three possibilities: “permatone process”, “rotopake process”, and “flexographic process”. Postal ballots from readers of The Mosstyper overwhelmingly chose the last of these, and “flexographic process” was chosen.

The greatest advances in flexographic printing have been in the area of photopolymer printing plates, including improvements to the plate material and the method of plate creation.

Digital direct to plate systems have been a good improvement in the industry recently. Companies like Asahi Photoproducts, AV Flexologic, Dupont, MacDermid, Kodak and Esko have pioneered the latest technologies, with advances in fast washout and the latest screening technology.