Two preferred metals for intaglio printing are copper and zinc. These metals are soft enough to be inscribed with a needle, scraped and burnished, but hard enough to allow lines and tones to be bitten by a mordant without causing brittle edges.

Copper and zinc plates can be polished and unpolished. Gauges are usually 16 to 20 gauge.

Is using copper harmful to my health? Ingesting copper is dangerous. Copper toxicity is the consequence of ingesting large amounts of the metal. (National Institute of Health: www.nlm.nih.gov/medlineplus/ency/article/002496.htm) 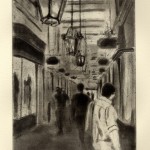 We use copper in printmaking in ways that do not involve absorbing significant amounts through the mouth, nose, skin, or respiration.

Is using zinc harmful to my health? Like copper, zinc ingested in significant amounts can cause zinc toxicity. (National Institute of Health: ods.od.nih.gov/factsheets/Zinc-HealthProfessional) 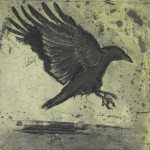 Lynne Peterfreund, A Murder of Crows, no. 17, etching, aquatint on copper.
[click to view larger]